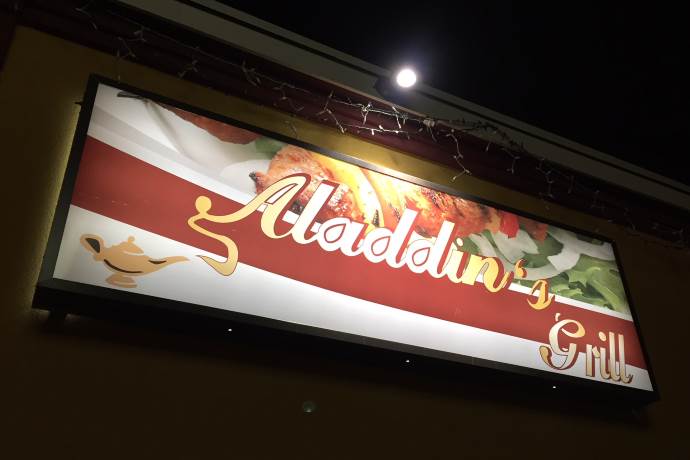 Let's face it--Route 60 in Revere isn't exactly the prettiest road in the Boston area. Between its heavy traffic, its sometimes-scary rotaries, and its endless sprawl both west and east of Route 1, you'd never mistake this outdated strip of asphalt for, say, Route 100 in Vermont or Route 6A on the Cape. But for those who like restaurants and other food spots that aren't all that well known, Route 60 has several, including a Mediterranean and Middle Eastern restaurant called Aladdin's Grill that is so far off anyone's radar that most people don't even know it exists outside of those who live in the immediate area. And considering that the Greater Boston area doesn't have too many places like this one, it makes this humble little eatery all the more special.

Aladdin's Grill is housed in a standalone structure on the eastbound side of Route 60 between Route 1 and Brown Circle (one of the aforementioned rotaries, with this one being where Route 60 intersects Route 107). The building is one of countless structures that line this part of the road on both sides, so it can be pretty easy to overlook the restaurant, and the fact that it looks just a little like a sub shop or a takeout spot from the outside can fool people into driving on if they're looking for a full-service restaurant. But Aladdin's is indeed a full-service restaurant (albeit a relatively small one), with a handful of tables in its one dining area and a counter up front that has some food items on display. The earthy colors used inside the restaurant and the posters and large clock hanging from the walls add a touch of coziness to Aladdin's Grill, and the folks behind the place are warm, friendly people who make everyone feel at home.

The menu at Aladdin's Grill features a mix of Middle Eastern and Mediterranean dishes with a nod toward Moroccan fare, so you may find some of the items here to be just a little different from those you might find in other Middle Eastern eateries in the region. Some of the best options on the menu are the appetizers, including the firm and thickly-wrapped stuffed grape leaves, the very garlicky hummus, the crunchy and meaty falafel, and the mixed olives in olive oil that have a kick to them thanks to pepper flakes. A chicken lemon soup is also offered as a starter, and an "Aladdin's Salad" is available as well, with a mix of greens, cucumbers, red onions, cherry tomatoes, bell peppers, radish, and pita chips included. There are a few sandwich options at Aladdin's, with the falafel sandwich with peppers and onions being a real highlight, while lamb kebab and chicken kebab sandwiches are also offered. A can't-miss dinner plate here is the chicken shawarma that comes with an outstanding tahini sauce and yellow rice on the side (a chicken shawarma sandwich is an option as well, as is a beef shawarma). Daily specials such as lamb chops, lamb shank, chicken tagine, and salmon are offered, and a children's menu includes wings, burgers, fish sticks, and more. A couple of desserts are a must if you have room, including the baklava and an item that might not be as familiar--kadaifi, which is a kind of shredded wheat which comes with nuts and a very sweet syrup. Alladin's does not serve alcohol, but you can get tea with mint here along with coffee, smoothies, and more.

Revere has a lot of good restaurants but for some reason, it isn't really seen as a dining destination. And as unappealing as Route 60 looks, if you look hard enough you will find some really great options for eating, including the totally unknown Aladdin's Grill, which should certainly be on your short list if you love the exotic flavors of Middle Eastern and Mediterranean fare.