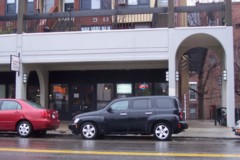 Many Bostonians consider the South End of Boston to be the best neighborhood in the city for dining out. Whether this is true or not is obviously in the eye of the beholder, but what is true is that the South End is the "in" place to go for many, and that some of Boston's most popular restaurants can be found in this charming neighborhood just south of the Back Bay. But hidden among the many well-known places such as The Butcher Shop, Mistral, and the Union Bar and Grille are some real gems, including a Peruvian and Brazilian restaurant on West Dedham Street called Don Ricardo's that is so hidden away that even some locals don't seem to know much about it.

Don Ricardo's, which is located in a little shopping area within the Villa Victoria housing development between Tremont and Shawmut, is certainly not blessed with glamorous digs like so many other South End restaurants are. It is, however, a friendly, laid-back place, with traditional artwork, old photos, and indoor plants giving the relatively plain interior a bit more atmosphere. The dining area has a decent amount of seating and the carpeting helps keeps the noise level down, making it a place where diners can converse without having to shout over one another.

The menu at Don Ricardo's is varied and interesting, with not only Peruvian and Brazilian dishes, but also some Mexican and Spanish items. Appetizers include a smooth, creamy, and mild guacamole, as well as empanadas (stuffed turnovers with a variety of fillings) and tostones (fried green plantains with carrot sauce). Several salads and soups are offered, with black bean soup and fish soup being offered daily. For entrees, the tallarin en salsa verde (Peruvian pasta in pesto sauce with thin, strips of breaded and fried steak on top) is simply wonderful (though a bit of an unusual combination) and the salpicon de pollo (sauteed chicken with peppers, onions, and tomatoes in a garlic white wine sauce) is both healthy and delicious. A number of other beef items can be ordered at Don Ricardo's, as well as lamb and pork dishes (including seco de cordero, which is lamb mixed with onions, garlic, and tomatoes and cooked in dark beer and cilantro sauce) and seafood dishes (such as pescado al vapor, or steamed fish in ajiajo sauce and a mix of veggies).

Don Ricardo's seems to be more of a neighborhood place than anything else, but the folks who own it are so welcoming that everyone who comes there is treated like family. This is rare in a neighborhood such as the South End, and it helps make this South American restaurant a special place worth seeking out. Feel like dining in the South End but aren't crazy about noisy crowds or trendy digs? Don Ricardo's might just be your place.

Similar restaurants can be found in these categories:
Restaurants in Boston
Moderately Inexpensive Restaurants