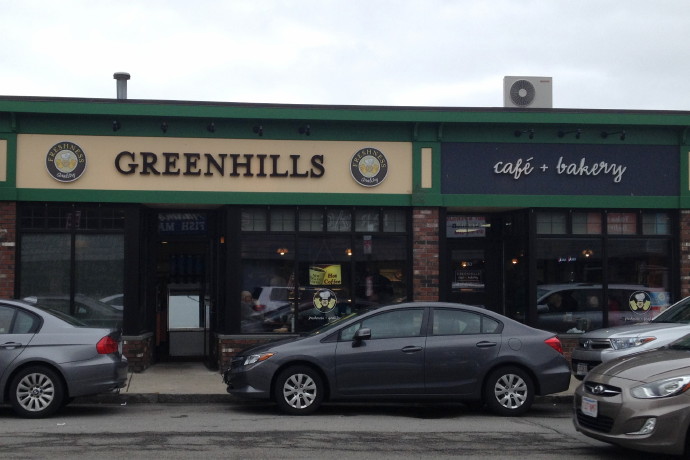 The Dorchester neighborhood of Boston is a sprawling area made up of a patchwork of smaller neighborhoods, including a number of commercial districts. And a couple of these commercial areas actually look like small villages, with Lower Mills and Adams Village both having an old-fashioned feel to them. Adams Village in particular hasn't changed much over the years, with many little independent shops lining Adams Street, including a wonderful little bakery and cafe called Greenhills that is almost like more of a social center than a place to get food.

Greenhills Irish Bakery resides in the heart of Adams Village, with limited street parking out front and more parking in a lot behind the place. A back entrance that can be accessed from the parking lot leads to a narrow hallway of sorts that has a few tables lining the wall, with a few more tables up against the front windows looking out at the street. The slightly cramped space is dominated by a front counter area where customers line up to place their orders, with the cases at the counter being filled with all kinds of goodies. Because Greenhills is an authentic Irish bakery--and because Adams Village is home to more than a few Irish immigrants--it is not uncommon to hear Irish brogues, and even Gaelic, being spoken inside the place.

Being that it is both a bakery and a cafe, Greenhills Irish Bakery offers both baked goods and lighter meals, including breakfast and lunch items. One of its most popular items is the Irish breakfast sandwich, which comes with a hearty combination of bacon (Irish or American), Irish sausage, black and white pudding, and eggs on a freshly-made roll. Among lunch options, Greenhills has delicious versions of turkey, ham, and roast beef sandwiches (all made with fresh bread, of course), along with daily specials that include chicken pot pie, shepherd's pie, and an Irish boiled dinner. Some of the real highlights here are the baked goods, with the place having one of the best brown breads in the Boston area, as well as a deliciously sweet raisin soda bread, a rich treacle bread, dense and flavorful scones (including a terrific version with blueberries), an array of excellent pies such as pecan, apple, and rhubarb, and seasonal treats such as hot cross buns. Coffee is also served at Greenhills, and Irish tea is offered, too.

Greenhills Irish Bakery may be well-known to folks in Adams Village and other parts of Dorchester, but it isn't really a household name outside of the area. It should be, however, as it has some truly marvelous meals and baked goods and really isn't that difficult to get to, being maybe a minute or two off the Southeast Expressway. This little eatery is just more proof that Dorchester is chock full of good food places and should not be overlooked as a dining destination.

Similar restaurants can be found in these categories:
Bakeries and Pastry Shops
Sandwich Places and Cafes
Restaurants in Boston
Inexpensive Restaurants