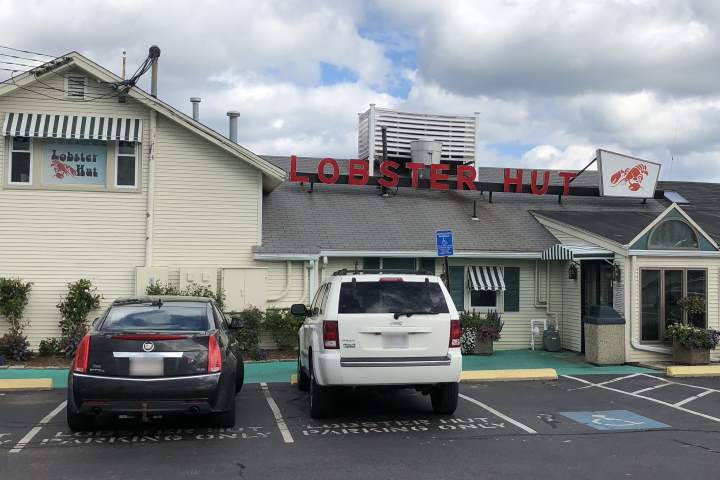 While most of the restaurants mentioned on this site are true hidden gems that few seem to know about, sometimes a dining spot gets looked at that is popular in specific circles but nearly completely unknown otherwise. The Lobster Hut in Plymouth is a good example of this, as this seafood shack--which has been around for more than 40 years--certainly does tend to get noticed by tourists during the heart of the summer while locals flock to it just about all year long. But you almost never hear of this place when it comes to folks in the immediate Boston area, and while it is does see its share of travelers on hot days in July and August, it seems like such nearby spots as Wood's Seafood and The Cabbyshack tend to get more notice. Whether the Lobster Hut is a lesser-known spot or not is certainly up for debate, but one thing is for sure--if you like old-fashioned seafood joints with great views and low prices (and you're itching to find such a spot that is open during some of the colder months as well), you will definitely want to read on.

The Lobster Hut resides along the town wharf just down the hill from the downtown area of Plymouth, and as is the case with several other restaurants along the harbor, it has stunning water views from both its dining area and its outdoor patio. The place is set up like your classic old-school seafood shack (which is basically what it is), with an ordering counter in the front when you first walk in, a large dining area to the right of and toward the back of the space, a slightly more private and quieter dining section tucked away further back, and the aforementioned outdoor deck which wraps around the back side of the structure right by the water. The system of ordering is pretty simple, with customers placing their orders at the counter, then grabbing a table and waiting for their number to be called, though with simple orders such as side dishes or drinks, patrons simply go to the counter to the right and pick up their orders almost immediately.

The menu holds few surprises at the Lobster Hut, which isn't necessarily a bad thing when you're talking about a bare-bones seafood shack. One thing that is different from some of the other seafood spots that line the New England coast is the fact that the prices here are at times low enough for diners to do a double-take; there aren't many places that offer broiled swordfish for $11.95, for instance, or a lobster roll for $12.,95. Both of these are terrific options, by the way, with the swordfish being firm but not too firm and having just a bit of dark meat for those who are into stronger flavors, while the lobster roll is relatively light on the mayo and has enough meat to render the bun nearly invisible. (A larger lobster roll can be ordered for a bit over $20, by the way, and a warm lobster roll with butter is also offered--and it is every bit as good as the chilled lobster roll.) The fish and chips and similar seafood nugget plate feature fresh whitefish and are battered nicely without being too greasy, and many other fried options can be had here, including a heaping order of fried whole clams along with fried clam strips (the latter of which are more tender than rubbery, which is obviously a good thing) as well as fried scallops, shrimp, oysters, and even fried lobster, which you don't see at too many restaurants. Lovers of scallops can also choose from a healthier broiled option, with the scallops being slightly browned and tender. And this being a restaurant that is well south of Boston, you can find a great version of quahogs, or "stuffies" here. For those who have trouble choosing what kind of seafood they want, there are combo plates and platters from which to choose, including a plate that includes shrimp, scallops, haddock, and lobster, and some popular regional items such as stuffed quahogs, clam chowder, lobster bisque, steamed lobsters, and steamers (the last two of which are seasonal) are available. The Lobster Hut also has some options for those who are looking for dishes other than seafood, including burgers, hot dogs, chicken sandwiches, grilled cheese, veggie burgers, and such sides as fries, onion rings, rice pilaf, and corn on the cob. Drinks include a limited selection of beer and wine (both of which are dirt cheap) as well as soda, coffee, and tea.

You don't really find many places like The Lobster Hut outside of New England, and even in the local area, it is tough to find such a place that is also open nearly all year long (the place generally closes for the season in late December and reopens in early February). It may not be the most hidden of gems, but this longtime fave on Plymouth Harbor is one not to miss, especially if you like your seafood fresh and cheap.

Similar restaurants can be found in these categories:
Seafood Restaurants
Restaurants South of Boston
Inexpensive Restaurants