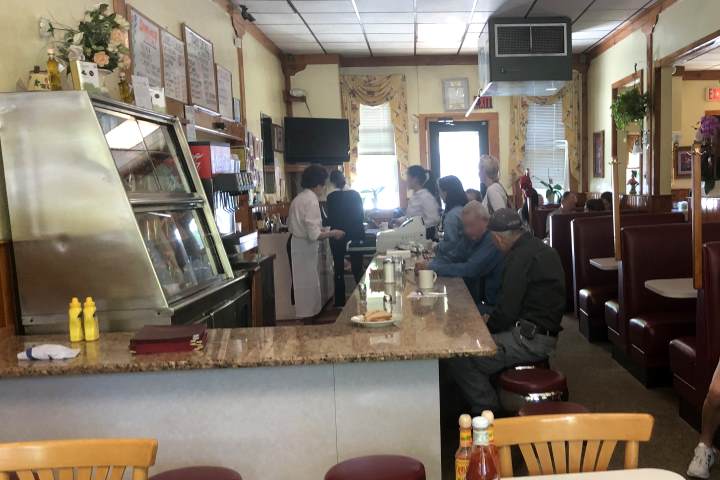 Each year, it seems harder and harder to find unpretentious little neighborhood restaurants where locals can hang out and enjoy some stick-to-your-ribs food at low prices, but if you look hard enough, you can still find them out there, including in some rather unexpected places. Take Wellesley Hills, for instance; known in part for its high-end shops, huge old homes, and affluent overall feel, this area near where Routes 9 and 16 intersect might seem like the last place to find a greasy-spoon diner, but it actually has a good one called Maugus Restaurant that has been serving up inexpensive comfort food for a number of decades. And as is the case with so many diners in the Greater Boston area, this charming spot has some Greek influences, so comfort food is certainly front and center here.

Maugus is one of those places that is very easy to miss, as it resides in an often-congested area that has a number of independent businesses lining the eastbound side of Route 16, and like some of the other retail and commercial spaces in Wellesley Hills, the signage is pretty subtle so you could drive by without even knowing that a restaurant is actually there. The space itself is a bit bigger than it may initially seem upon entering, as the main room is very narrow with a counter area with stools to the left and a handful of booths running along the wall to the right, but if you go further back, there is a dining room off to the right that has several more tables including ones you can put together for larger groups. The overall feel of Maugus is that of a classic diner, which in some respects is exactly what it is, and one that reflects its history as the restaurant dates all the way back to 1937.

The menu at Maugus holds few surprises for the most part, which is actually a good thing because neighborhood breakfast and lunch spots tend to focus on familiar dishes with no real need to try to reinvent the wheel. All the classics can be found here at breakfast, including such dishes as ham and eggs, omelettes, eggs benedict and florentine, pancakes, waffles, French toast, muffins, bagels, coffee, and frappes. (Breakfast can be ordered at lunch as well.) The lunch menu also has common diner items such as wings, burgers, hot dogs, turkey clubs, egg salad, meatloaf, roast beef sandwiches, fries, and onion rings. Things do get a bit more interesting with the Greek section of the menu as well as some Greek items scattered about throughout the rest of the menu as well; here you will find solid takes on all the favorites, including a rich egg lemon soup, a Greek salad with lots of feta cheese, a village salad with such ingredients as feta, olives, cucumbers, and oregano, a decadent pastitsio with plenty of bechamel sauce, a similarly decadent moussaka with layers of meat, eggplant and bechamel on top, savory squares of spanakopita, or spinach pie, and other Greek items such as gyros, souvlaki, and baked lamb. Desserts are also available at Maugus, with a number of pies offered, including blueberry, apple, and lemon meringue. Prices for nearly all meals are plenty reasonable, with many items being on either side of $10.

You rarely hear of new diners and neighborhood breakfast and lunch spots opening these days, but you definitely hear of them closing here and there, which makes it all the more important to seek these places out as they get tougher and tougher to find. And Maugus is certainly one to seek out for its solid cheap eats, friendly service, and low-key atmosphere. They don't make them like this Wellesley Hills eatery anymore, and it's good to see that this place just keeps motoring along after more than 80 years in business.

Similar restaurants can be found in these categories:
Delis and Diners
Greek Restaurants
Restaurants West of Boston
Inexpensive Restaurants