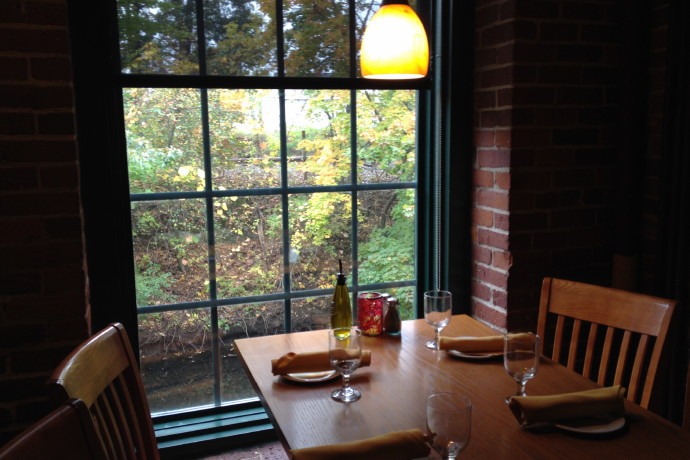 Those who are in their teens or twenties may never have heard of a restaurant in the North End called The European, but for more than a few who are a bit (or a lot) older, hearing that name brings back fond memories of this long-closed Italian restaurant near where Hanover Street and Cross Street intersect. The European shuttered in the late 1990s after being in business for more than 80 years, saddening many who remember the terrific pizza served at this place, but the restaurant--and the pizza--is not really gone forever, as the same family opened a dining spot called Aprile's European Restaurant in North Chelmsford back in 2010, moving into a charming space in an old brick mill building that sits next to a little brook. And while the pizza is perhaps not quite identical to that of the old European--and the new digs are not as old-school as the original--Aprile's is well worth the drive up north from Boston for both the food and the atmosphere.

Aprile's European Restaurant resides in a sprawling millhouse that looks much like those along the nearby Merrimac River in such cities as Lowell, Lawrence, and Haverhill. And like many of those old factory buildings, this one has been beautifully restored with a number of businesses now calling it their home. Aprile's take up a fairly sizable chunk of the structure, with a large wraparound bar to the left and a huge dining area to the right that looks a little like a function room (albeit a very attractive one). Remnants of days gone by can be seen throughout the space, with axles, wheels, and fans hanging from above, exposed pipes and beams running along the ceiling, exposed brick everywhere, and huge windows that look out over the brook as well as the train tracks and woods behind it. Much of the dining area is well away from the bar, making for a quiet dining experience, though it can be just a tad echoey due to the extremely high ceiling toward the back of the dining room.

The menu at the old European in the North End featured pizza as well as a variety of pasta and seafood dishes, and the new spot seems to offer many of the same items on its menu. And like the now-closed landmark spot, pizza is the focus here, with pies coming in 14-inch, 16-inch, and 25-inch sizes (the latter being perfect for family and business gatherings). For many folks, the rich and hearty sauce was the centerpoint of the pizzas at the old European, and the pizzas at Aprile's are similar, with the perfectly-seasoned sauce helping bring out the flavors of the cheese, the bubbly (and moderately thick) crust, and any toppings that might be added. Speaking of toppings, the artichokes, sweet Italian sausage, mushrooms, and pepperoni are all excellent options, and if you can tear yourself away from the sauce, the margherita--which is a white pizza with basil, tomatoes, olive oil, and mozzarella--is a very good option. Beer, wine, and spirits are available at Aprile's, as well as a variety of nonalcoholic beverages.

Even though it has been open for a few years now, a lot of folks still don't realize that The European lives on north of Boston. It definitely isn't as easy to get to for those who live in the city, but if you have a car (and there's no traffic) you can get from downtown Boston to Aprile's in just a shade over a half hour. And much like the institution that was The European, the Chelmsford eatery feels a bit like a destination spot, in part because of its wonderful atmosphere--and the classic pizza doesn't hurt all that much, either.