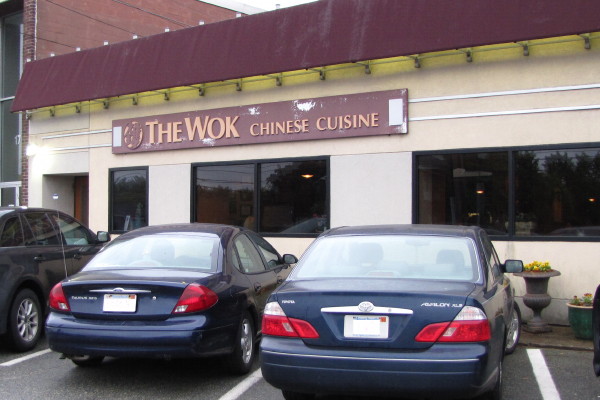 Good Chinese food can sometimes be found in the most unusual places, and that is surely the case with a restaurant in Wellesley called The Wok, which is a friendly spot that is quiet, comfortable, and relatively spacious. And unlike many Chinese eateries in the suburbs of Boston, this one features some authentic dishes that you might expect to see in Boston's Chinatown neighborhood, though it also has a good number of more familiar Chinese/American items as well. The Wok also happens to be a hidden gem that is literally "hidden" even though its official address is Route 9 (more on its exact location in a bit).

The Wok resides in a squat and rather plain-looking building that looks like it may have been used for something other than a restaurant in the past. As indicated earlier, the place is extremely easy to miss unless you know that it is there, as its location on a frontage road that serves as a sort of on-ramp to Route 9 renders it basically invisible to folks driving at high speeds on this rather outmoded divided highway. Once you do find the The Wok, it turns out to be a rather pleasant and almost upscale-feeling spot, with lighting that isn't too harsh, earthy colors throughout, a carpeted floor that keeps the noise level down, white tablecloths, and a mix of large and small tables as well as booths, with the tables being spaced far enough apart so that you don't feel crowded.

The menu at The Wok has a little bit of everything on it, with the place leaning toward gourmet Chinese fare that focuses mostly on Hong Kong, Hunan, and Szechuan dishes. Starters include a wonderfully spicy hot and sour wonton soup as well as a more sweet-tasting regular hot and sour soup; a spicy fish soup that gets a boost from ginger and white pepper; a steamed plate that has four outstanding items--shrimp shumai, shrimp dumplings, chicken ravioli, and black bean chicken (the last of which has a deliciously bitter and pungent sauce); and for those who like Americanized Chinese food, a pu pu platter that comes complete with chicken fingers, egg rolls, crab rangoons, teriyaki beer, spareribs, and more. Meals at The Wok include a terrific version of moo shi that has a variety of aromatic stir-fried veggies and meat options such as pork, duck, lobster, chicken, beef, and shrimp (a bean curd version is also offered); a marvelous lobster egg foo yung, with the omelet-style dish being covered with a rich brown sauce and having an essence of lobster flavor throughout; a mild but tasty plate of angel hair noodles with black mushrooms, chicken, shrimp, and pork; and for vegetarians, a spicy kung pao dish with tofu mixed in. Drinks include a handful of beer options (including Tsingtao) and a few decent wines available by the glass, while desserts include a sinful plate of fried bananas with a heavy sprinkling of colored sugar.

While The Wok may not quite be in the upper echelons of Boston-area Chinese restaurants that includes such places as Shanghai Gate in Allston and Peach Farm in Chinatown, it is quite impressive in its own right, especially when compared to other Chinese dining spots in the suburbs. And the fact that it has a parking lot, not much in the way of crowds, and comfortable seating gives it a bit of an edge compared to some of these better spots in Boston. It may be in an odd location that is literally "hidden," but The Wok certainly has a lot going for it, especially for those who live west of the city.